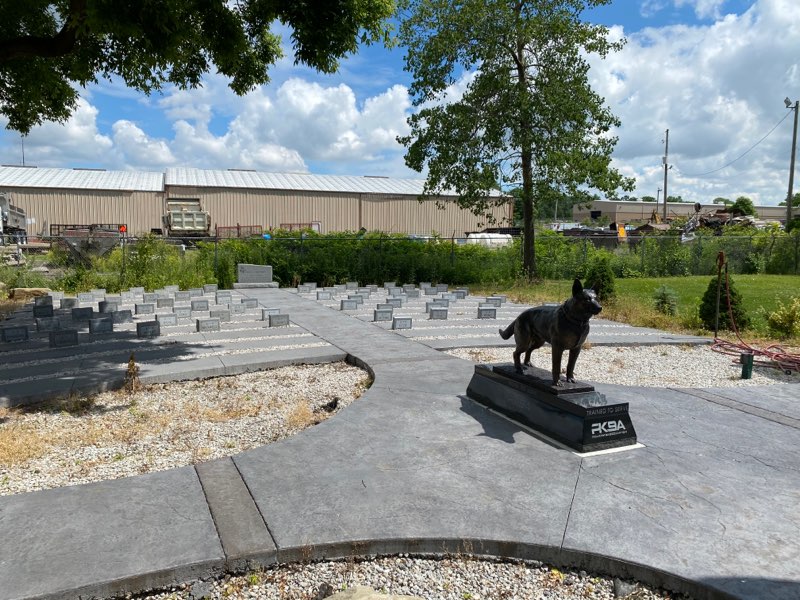 The Police K-9 Association Cemetery and Memorial Gardens were established to dedicate the memory of those Brave K-9’s that had represented their Departments, Families and the PK9A Honorably.

Each stone is handcrafted and placed by the Police K-9 Association at our training field in Canton, Ohio.

The life size bronze statue of K-9 Jethro sits proudly at the head of the cemetery.  This statue was handmade by the talented Utah sculptor, Lena Toritch.  Commemorating Jethro, one of our own, a Canton Police Department K-9 who was killed in the Line of Duty on January 10, 2016.

Each of these K-9’s will remain in our Hearts, and by our sides, forever.

K9 Jethro succumbed to gunshot wounds sustained early the previous morning while attempting to apprehend a burglar inside a grocery store at 1272 Harrison Avenue SW.

Officers had responded to an alarm activation at approximately 1:15 am and located the subject inside. The subject disobeyed officers’ commands and Jethro was deployed. The subject opened fire, striking Jethro three times. The man then fled and continued firing at officers, who returned fire.

The man was taken into custody a short time later after he was found and suffering a gunshot wound to his leg. He was subsequently convicted and sentenced to 34 years in prison for killing Jethro and 11 years for burglary, with the sentences to run consecutively.

K9 Jethro, Badge number 60, was transported to Stark County Veterinary Emergency Clinic but died as a result of the wounds.

We will never forget your Sacrifice, Jethro. We will Honor you for the rest of our days. Godspeed. 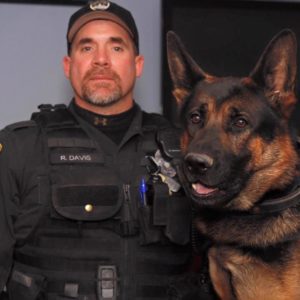 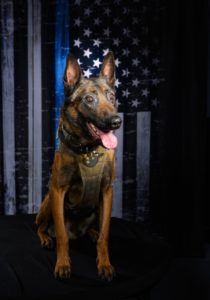 K-9 Bono passed away unexpectedly, he was still on Active duty with his handler, Sgt. Cook.

K-9 Bono was purchased from Tri-State Canine Services in October 2014 and spent five weeks training with K-9 Officer Rob Cook before starting his duties with the City of Steubenville Police Department.

Bono was a Dual Purpose K-9 who had a successful and decorated career working for the City, and assisting all of Jefferson County as well as all surrounding municipalities.

K-9 Bono and Sgt. Cook were dedicated members of the PK9A since their inception as a Team in 2014.

We will Honor and Carry you with us, Bono. Godspeed.

Uhrichsville. A Warrior and beloved member of the Tuscarawas County Sherriff’s Office, died peacefully, early Friday, September 25, 2020, surrounded by his family following a valiant battle with cancer. Born in Union Hospital at Dover, Ohio on November 27, 1974, Mike was a son of Deberah (Gus) Zoppi of Midvale and the late Michael E. Creager. Mike was a 1993 graduate of Indian Valley High School; and prior pursuing a career in law enforcement, worked for Marlite at Dover and served as the caretaker of the Tuscarawas County Fairgrounds. It was during this time Mike began working as a Reserve Deputy with the Tuscarawas County Sherriff’s Office and was part of the Mounted Unit. In 2010, he became a Road Deputy and transitioned into the K-9 Unit. His partner, Fygo, a Belgian Malinois, became a State of Ohio certified patrol/narcotics detection K-9. Together, Mike and Fygo trained with the Police K-9 Association (PK9A), where Mike served as a Board Member. Mike and Fygo also worked as members of the Tuscarawas County Sherriff’s Office SWAT team. Mike was a talented K-9 trainer who had the opportunity to travel throughout the United States to work with other departments as they trained their K-9 officers. Mike’s world, however, revolved around his daughters. There isn’t anything he wouldn’t do for them. He was a skilled craftsman who enjoyed making special furniture for his daughters and then helped them to paint and finish their pieces. He also enjoyed making custom wooden flags. He will be missed by many for his willingness to help others, his fun-loving spirit, and selfless acts. 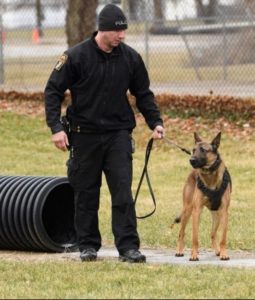 Uhrichsville. Andrew passed away on Monday, March 2, 2020 at his home. A son of Phillip L. and Ann M. (Consolo) Keller, Drew was born July 6, 1990 in Union Hospital at Dover. Drew graduated from Tuscarawas Central Catholic High School at New Philadelphia in 2009. He then continued his education at the University of Toledo where he graduated with a Bachelor’s Degree in Criminal Justice in 2012. In 2014, Drew graduated from the Police Academy at Central Ohio Technical College and in 2018 from Tiffin University with a Master’s of Science Degree in Criminal Justice with a concentration in Homeland Security Administration. As a young child, Drew very much enjoyed portraying an Indian boy in the outdoor drama, Trumpet in the Land. He was proud to have traveled with the People to People Student Ambassador Program to England, Ireland, Wales and Australia. And, while in high school, Drew was a member of the football and wrestling teams, the National Honor Society and was a Boys’ State Delegate. Drew’s greatest joy in life came from his years in law enforcement, especially working for the Village of Dennison as a K-9 Officer with his beloved partner, Bronco.